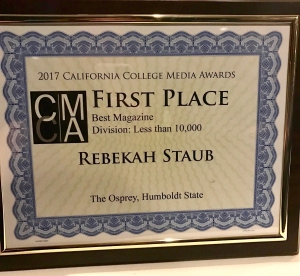 The California College Media Association honored Osprey as Best Magazine for its spring 2016 issue that covered campus rape and guns. Editor-in-chief Rebekah Staub was recognized for her story on the university’s slow investigation of an international student raped by a football player. The same issue also won Best Photo for the photo Jared Funk took of a student holding one of the guns he owns. The awards were delivered to the student journalists at a banquet in San Francisco on March 11.